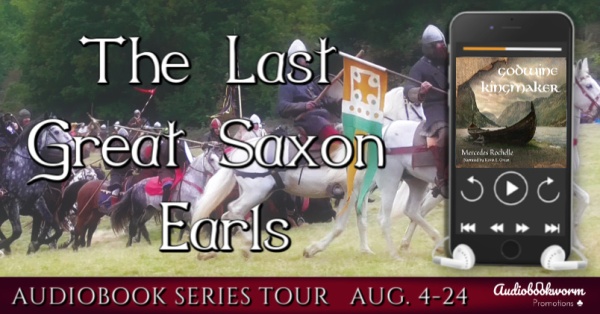 Synopsis: Harold Godwineson, the Last Anglo-Saxon King, owed everything to his father. Who was this Godwine, first Earl of Wessex and known as the Kingmaker? Was he an unscrupulous schemer, using King and Witan to gain power? Or was he the greatest of all Saxon Earls, protector of the English against the hated Normans? The answer depends on who you ask.

He was befriended by the Danes, raised up by Canute the Great, given an earldom and a wife from the highest Danish ranks. He sired nine children, among them four earls, a queen, and a future king. Along with his power came a struggle to keep his enemies at bay, and Godwine’s best efforts were brought down by the misdeeds of his eldest son Swegn.

Although he became father-in-law to a reluctant Edward the Confessor, his fortunes dwindled as the Normans gained prominence at court. Driven into exile, Godwine regathered his forces and came back even stronger, only to discover that his second son Harold was destined to surpass him in renown and glory.

The Last Great Saxon Earls is phenomenal! I felt fully transported back to the middle ages through great narration and storytelling. The story of how Godwine came to power favored by Canute the King and his marriage to Gytha was exceptional. My favorite part was Godwine and Gytha’s early struggles and breakthrough in their marriage. Narrator Kevin E. Green captures it perfectly!

About the Author: Mercedes Rochelle

Mercedes Rochelle is an ardent lover of medieval history, and has channeled this interest into fiction writing. She believes that good Historical Fiction, or Faction as it’s coming to be known, is an excellent way to introduce the subject to curious readers. Her first four books cover eleventh-century Britain and events surrounding the Norman Conquest of England. The next series is called The Plantagenet Legacy about the struggles and abdication of Richard II, leading to the troubled reigns of the Lancastrian Kings. She also writes a blog: HistoricalBritainBlog.com to explore the history behind the story. Born in St. Louis, MO, she received by BA in Literature at the Univ. of Missouri St.Louis in 1979 then moved to New York in 1982 while in her mid-20s to “see the world”. The search hasn’t ended! Today she lives in Sergeantsville, NJ with her husband in a log home they had built themselves.

About the Narrator: Kevin E. Green

I have been narrating audiobooks for nearly 10 years, and have recorded over 80 full length books.  I first started ‘narrating’ books when reading to my two young sons at bedtime, and I read the complete Lord of the Rings to each of them -including character voices!   I have many years acting experience, and I have my own recording studio where I record and master my own recordings.  I love narrating books for a living and enjoy all genres, fiction and non-fiction alike.