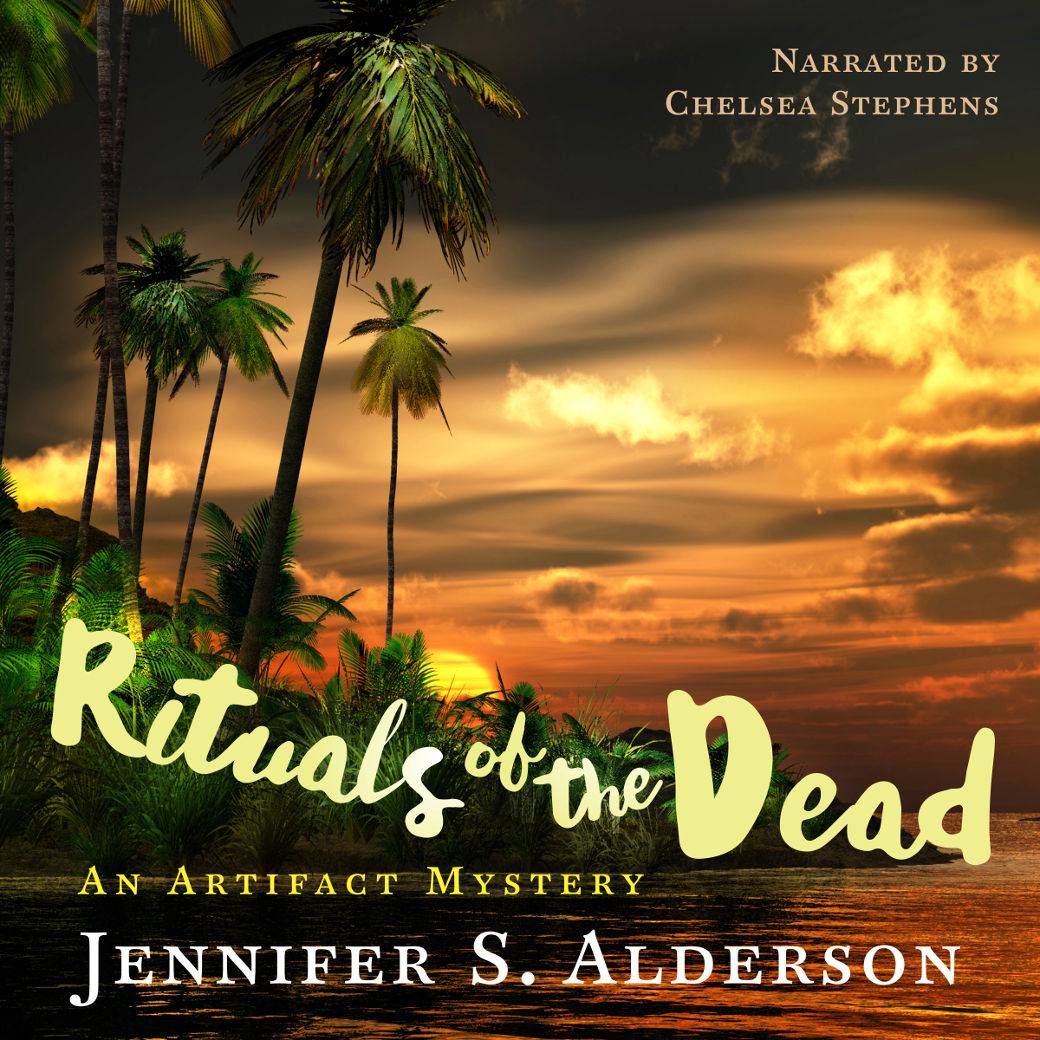 Rituals of the Dead: An Artifact Mystery

Art-history student Zelda Richardson is working at the Tropenmuseum in Amsterdam on an exhibition of bis poles from the Asmat region of Papua – the same area where a famous American anthropologist disappeared in 1962. When his journal is found inside one of the bis poles, Zelda is tasked with finding out more about the man’s last days and his connection to these ritual objects.

Zelda is pulled into a world of shady anthropologists, headhunters, missionaries, art collectors, and smugglers – where the only certainty is that sins of the past are never fully erased.

Join Zelda as she grapples with the anthropologist’s mysterious disappearance 50 years earlier and a present-day murderer who will do anything to prevent her from discovering the truth.

All four mysteries in the Adventures of Zelda Richardson series are stand-alone novels, and they can be listened to in any order.

Another great adventure with art student Zelda Richardson, an inquisitive young sleuth who won’t stop until she finds the truth. Rituals of the Dead is a very fascinating mystery full of suspense, history, intrigue dealing with stolen artifacts, homicides and a missing anthropologist. Everything from the setting, the characters and circumstances make this a compelling mystery. If you like amateur sleuths don’t miss this series. Join up with Zelda Richardson!

About the Author: Jennifer S. Alderson

Jennifer S. Alderson was born in San Francisco, raised in Seattle, and currently lives in Amsterdam. Her love of travel, art, and culture inspires her ongoing mystery series, the Adventures of Zelda Richardson. Her background in journalism, multimedia development, and art history enriches her novels. When not writing, Jennifer can be found in a museum, biking around Amsterdam, or enjoying a coffee along the canal while planning her next research trip.

There are currently four books in the stand-alone series following the adventures of traveler and culture lover Zelda Richardson. In Down and Out in Kathmandu, Zelda gets entangled with a gang of smugglers whose Thai leader believes she’s stolen his diamonds. The Lover’s Portrait is a suspenseful “whodunit?” about Nazi-looted artwork that transports readers to wartime and present-day Amsterdam. Art, religion, and anthropology collide in Rituals of the Dead, a thrilling artifact mystery set in Dutch New Guinea (Papua) and the Netherlands. Her short story set in Panama and Costa Rica, Holiday Gone Wrong, will help fans better understand this unintentional amateur sleuth’s decision to study art history and give new readers a taste of her tantalizing misadventures.
The Lover’s Portrait was Chill With A Book’s January 2018 Book of the Month and won the Silver Cup in Rosie’s Book Review Team 2017 Awards, Mystery category. TripFiction recently named it one of their 10 Favorite Books set in Amsterdam. It also won a Chill With A Book Readers’ Award, Readers’ Favorite 5 star medal, was one of The Displaced Nation magazine’s Top 36 Expat Fiction Picks of 2016, and came in at 14 in BookLife’s 2016 Prize for Fiction in the Mystery category. The Lover’s Portrait was also one of Women Writers, Women’s Books magazine’s Recommended Reads for April 2017.

Her travelogue, Notes of a Naive Traveler, is a must read for those interested in learning more about—or wishing to—travel to Nepal and Thailand. It was also awarded a Readers’ Favorite 5 star medal.

About the Narrator: Chelsea Stephens

Chelsea Stephens has a long time love and appreciation for the performing arts, with experience in on-stage acting, signing and voice over. Her love for consuming books and the pursuit of the story led her to narration. She loves unfolding characters and bringing listeners into new worlds. She is an experienced voice actor with a talent and love for mystery, fantasy and YA novels.
She’s a mom to a gaggle of young ones living in the Midwest with her lumbersexual husband.

2 thoughts on “Audiobook Review: Rituals of the Dead by Jennifer S. Alderson”