This audiobook was AWESOME!

CATCH ME IF YOU CAN Synopsis: On an island bordering the coast of South Carolina, a convention is planned for “Catch Me” game enthusiasts. The game, designed by Stuart Harrington, wealthy businessman, is the genius behind the hottest game craze. But only ten guests are able to arrive before Brian, a category four hurricane, makes landfall. Lois Steinberg washes ashore on the beach. Amongst strangers, she has no idea who to trust and when Paul, the cook, is found murdered, events happen too eerily reminiscent of any “Catch Me” game that Stuart Harrington could ever conceive.

I received this audiobook as part of my participation in a blog tour with Audiobookworm Promotions. The tour is being sponsored by Miss Mae. The gifting of this audiobook did not affect my opinion of it.

This is one of best mysteries of I’ve heard this year. With a full cast of great narrators, stellar plotting, and a suspenseful mystery, its easy to get five stars!  I’m not even sure how to describe the full experience of this book. Catch Me If you Can is an award winning book for a reason. 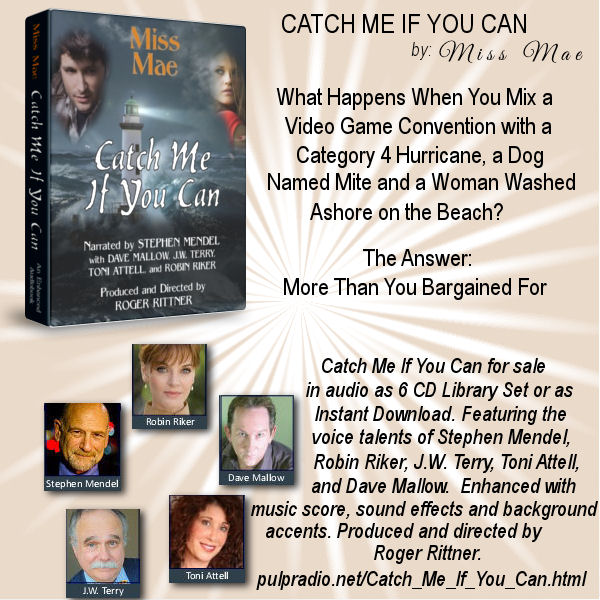 This cast of narrators was absolutely phenomenal. They each had well written characters who seemed to “leap off the pages” with their own motivations in the story. The production quality and sound effects played a very critical role throughout the book in my opinion. From the background music, sound of the storm, echoes from various spaces, footsteps, fights, you felt like you were in the theater! My only beef was in the very beginning. The sound of the storm wind overpowered the voice of the narrator and that made for a slow start. Very professional.

About the Author: Miss Mae

Miss Mae is all about romantic mysteries. With her writing style compared to the likes of Agatha Christie, her books “Said the Spider to the Fly”, “When the Bough Breaks”, “Dove Island”, “It’s Elementary, My Dear Winifred” and “See No Evil, My Pretty Lady” are award winning best sellers. The novellas “Miss Penelope’s Letters”, and “Through a Glass Darkly” have received top rated five-star reviews. Her latest murder mystery, “Catch Me If You Can”, in audio format, has won the platinum award in the 2017 Hermes Creative International Competition. Tantalizing trailers, and more information, is readily available at her website.

She’s also penned three tales in the ‘Ahoy, Mischaps!’ children’s/humor series. Book #1 is “Ahoy, Gum Drop!” followed by Book #2 “Ahoy, Out There!” with Book #3, “Ahoy, Mummy Mia!” In these slightly cracked stories, readers are introduced to a cast of intriguing, extraordinary and downright bizarre characters, accompanied by the one and only I.B. Nosey, the ‘official unofficial’ reporter. To learn more about the ‘Mischaps’ and cyberspace’s only Pukelitzer Award winning interviewer, visit ‘Feeling Nosey?’

One thought on “Audiobook Blog Tour: Catch Me If You Can by Miss Mae”